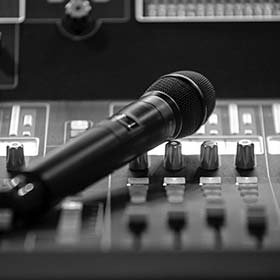 Although very similar to subtitling, closed captions are created with the hearing-impaired in mind. They include the spoken word, sound descriptions, speaker identification, indications of mood, denotations of music and contextual information.

These and other elements combine to ensure that your video content is accessible to your hearing-impaired audience.

Everyone knows this, right?

Well written closed captioning and subtitles can make a significant difference to a viewers’ experience and video content consumption: amateur versus professional

Simply put, closed captions should be easy to read and allow the hearing-impaired viewer to enjoy your content.

Lines should be split where natural breaks in speech occur or where it makes grammatical sense. Likewise, italics, hyphens, and brackets must be used consistently and accurately to interpret sound effects, speaker changes and forced narrative information for closed captioning.

Our experienced team knows that closed captioning is more than mere words – it is culture, nuance, and humour.

The core objective is to correctly convey the essence of the message and, at the same time, balance the technical requirements, with particular attention given to the reading time of the viewer and the length of the text.

We use the latest software to produce perfectly synchronised content that will enable your audience to connect with your media, delivered timeously and hassle-free.

We work with television series, movies, animations, documentaries, and corporate presentations. The careful and continuous monitoring of each of the steps involved by a dedicated project manager guarantees the uniformity of the final product.

Whatever your project, our crafty team are here to help so you can effectively communicate your message.

Caption files can be supplied in a range of formats

What is the difference between subtitling and closed captioning, you may ask?

Basically, subtitles assume your audience can hear the audio but require the dialogue to be provided in text form as well.

While closed captioning assumes your audience can’t hear the audio and requires a text description of what they would otherwise be hearing.

Subtitling for the deaf and hearing-impaired is the transcription of spoken dialogue in a video.

This type of subtitling distinguishes itself from standard subtitling as it contains additional information, including sound effects and speaker identifications, as well as onscreen text transcription.

Simply, the transcription of the speech.

This type of subtitling assumes that viewers do not have hearing difficulties. Only the spoken dialogue is subtitled.

Subtitles act as an alternative to voice-overs for your localised and translated videos and offer a quick way of providing multilingual video content.

Discovery Digital Networks, in partnership with 3PlayMedia, decided to test the theory of improved SEO and ROI with video captioning. Closed captions were created for eight of their channels.

In the first 14 days after adding closed captions, they registered a 13.48% increase in views.

Next, captions were switched on and off for some of the days. The traffic was visibly lower on the days that the captions were off. The lifetime increase in views stabilised at a substantial 7.32%.

The SEO studies conducted by Discovery Digital Networks, This American Life and SafeNet help to measure and record the benefits of captioning and transcription.

The documented increase in views, search traffic, user engagement and search rank clearly prove that captioning has a significant impact.

Closed caption videos in the classroom

According to a study done by the Journal of Instructional Pedagogies, closed captions were originally developed to help the hearing impaired. In addition, closed captioned videos were also widely used to benefit English as second language learners (Zamoon, 1996).

Many believe that close captioned videos are intended to help the hearing impaired or non-native English speakers, but the extant research demonstrates that closed captioned videos also benefit literate capable adults with no hearing impairment (Gernsbarcher, 2015). This study proposes that the use of closed caption videos in college classes can enhance students’ learning experience.

According to the NCBI, more than 100 empirical studies, listed in the appendix, document the benefits of captions.

The numerous empirical studies referenced in the appendix demonstrate that captions benefit everyone who watches videos, from younger children to older adults.

Captions are particularly beneficial to persons watching videos in their non-native language, children and adults learning to read, and persons who are D/deaf or hard of hearing.
Gernsbacher M. A. (2015). Video Captions Benefit Everyone. Policy insights from the behavioral and brain sciences, 2(1), 195–202. https://doi.org/10.1177/2372732215602130

We use cookies on our website to give you the most relevant experience by remembering your preferences and repeat visits. By clicking “Accept All”, you consent to the use of ALL the cookies. However, you may visit "Cookie Settings" to provide a controlled consent.
Cookie SettingsAccept All
Manage consent

This website uses cookies to improve your experience while you navigate through the website. Out of these, the cookies that are categorized as necessary are stored on your browser as they are essential for the working of basic functionalities of the website. We also use third-party cookies that help us analyze and understand how you use this website. These cookies will be stored in your browser only with your consent. You also have the option to opt-out of these cookies. But opting out of some of these cookies may affect your browsing experience.
Necessary Always Enabled
Necessary cookies are absolutely essential for the website to function properly. These cookies ensure basic functionalities and security features of the website, anonymously.
Functional
Functional cookies help to perform certain functionalities like sharing the content of the website on social media platforms, collect feedbacks, and other third-party features.
Performance
Performance cookies are used to understand and analyze the key performance indexes of the website which helps in delivering a better user experience for the visitors.
Analytics
Analytical cookies are used to understand how visitors interact with the website. These cookies help provide information on metrics the number of visitors, bounce rate, traffic source, etc.
Advertisement
Advertisement cookies are used to provide visitors with relevant ads and marketing campaigns. These cookies track visitors across websites and collect information to provide customized ads.
Others
Other uncategorized cookies are those that are being analyzed and have not been classified into a category as yet.
SAVE & ACCEPT